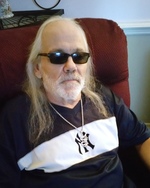 David "Dallas" Nelson passed away in his sleep on Sunday, February 9, 2020. David was born in Mobile on March 14, 1953, to Emmitt and Eunice, raised on Conception Street on the very spot where the city jail sits today, a fact he found great humor with in later years. In his teen years, he lived in Texas and later Pensacola, where he graduated from Woodham High School. David did not excel at team sports lasting only three days on the football team before trying to hit a coach with his helmet for yelling at him. Instead, David surfed. He once built his surfboard, with advice from famed surfer Yancy Spencer. David spent a fantastic season catching waves, including actually surfing during one of our smaller tropical storms. He did not fear 12-foot waves!

David also played music. His band, the People's Reunion, perform at the famed Pizza Pub in Pensacola and on the local cancer telethon. His rendition of Country Roads was only exceeded in popularity by his Elvis act performed at many bars on the causeway. He wore his "Elvis sunglasses" with pride until the day he died. David was preceded in death by his friend and lead guitarist Paul, an excellent musician who's the overuse of minors, 5ths, and 7ths forever frustrated him. Speaking of Paul, David poked fun at him because Paul changed his last name from to a stage name How amused would Paul have been if he learned that in the '90s, Davis adopted a stage name of Dallas? Often some of us kept calling him David, and he kept correcting us - call me Dallas.

Unlike his two brothers, whom he secretly admired, Dallas chose to enter the workforce and not join the military. Dallas worked as a carpenter, an oil rig roughneck, and later as a DJ/Bouncer. Years later, the day work and nightlife took its tolls, but not before he had many adventures and stories of a full life lived.

Dallas lost the love of his life, his wife Cindy, in 2013, and his heart was broken when she passed suddenly. Then just two months ago, he lost his beloved dog Ozzie who died in his arms. Those of us who know and love Dallas knew that Ozzie was his last connection, the link to Cindy, and again, his heart was broken.

I would be remiss not to say that some might look at David's situation how his final years were spent. That he had little material wealth. That his health was horrible, and say poor David, he was what this world might call poor. But David was not always in that situation. Some of us in this room remember when he had bug bucks, cool cars, good jobs, the best clothes. David was a good guy, and he was cool and fun, and the truth is told, he was the same when he had those things as when he did not as we all are. Friends and loved ones remain and will fondly remember David/Dallas. His sister Linda and brother-in-law John, his brother Tim and his wife Chris, nephews and nieces. His friends Wayne and Lucky. And his loving roommates whom he held so dear – who were with him to the end, Ann and his nephew Clint. He loved us all, and he is loved.

We who remain will miss him, but we who remain also rejoice because we know that a few years ago, he accepted Jesus Christ as his Lord and Savior. We the faithful know that David "Dallas" Nelson passed away in his sleep on Sunday, February 9, 2020, and at once woke up in the presence of Jesus, where he will remain for eternity. You know what lets take a second and all picture this. David got to heaven and was assigned his job. Perhaps the Lord said let's use David as a warrior angel then again, maybe he remembered the People's reunion and told David, here's a spot in the Choir. Amen!